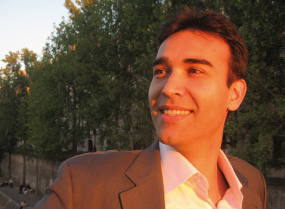 Bruno Procopio is rapidly becoming one of the most prominent harpsichordists of the new generation.

Born in Brazil in 1976, Mr. Procopio began his musical studies in Rio de Janeiro with Marcello Fagerlande and Pedro Personne. In 1994, his exceptional talent brought him to France, where he entered the harpsichord class of Noëlle Spieth, at the Conservatoire National Régional de Paris, obtaining his diploma soon after. In 1996 he gained admission to the prestigious Conservatoire Supérieur de Musique de Paris, where he studied the harpsichord with Christophe Rousset and Pierre Hantaï, chamber music with Blandine Ranou and Kenneth Weiss, and pianoforte with Patrick Cohen. He graduated in 2001 with first prizes in harpsichord and continuo performance.

In 2004 Mr. Procopio created the ensemble Les Solistes du Palais Royal. One of his primary objectives is to promote the works of major Brazilian composers of the colonial period. He collaborates actively with musicologists in his native country to create original, exciting programs which reunite the lesser known masterpieces of the new world with those of their celebrated European contemporaries.

Bruno Procopio is the artistic director of the Early Music Festival of Paraty in Brazil.

Bruno Procopio founded the Paraty label in 2006, with the support of Intégral Distribution, in order to explore, on period instruments, the rich repertory of baroque and classical music.

The first release for the label is vol. 2 of the Bach Partitas, continuing a project started by Bruno Procopio in 2004. The first volume of the Partitas was very well received by music critics, with five stars from Diapason magazine, and a critic from Fanfare magazine listing it as one of the five best Baroque CDs of the year in USA.

END_OF_DOCUMENT_TOKEN_TO_BE_REPLACED

Apologies, but no results were found. Perhaps searching will help find a related post.

What a joy to find every note and word placed carefully and yet within the weight of deeper sentiments…. simply for the sheer brilliancy of Procopio’s playing. Perhaps the best of the whole CD for its combination of grace and…
END_OF_DOCUMENT_TOKEN_TO_BE_REPLACED

“Bruno Procopio directed his four singers and a handful of instrumentalists in performances that negotiated the fine line between devotional austerity and bravura with exquisite dexterity.”

In the next CD, young Brazilian harpsichordist Bruno Procopio, a student of Pierre Hantaï, displays many of his teacher’s most distinguishing traits – relentless rhythmic drive, passionate precision and intelligent understanding of construction. But he adds a personal touch that…
END_OF_DOCUMENT_TOKEN_TO_BE_REPLACED

END_OF_DOCUMENT_TOKEN_TO_BE_REPLACED

Fiesta Criolla/From Lisbon to Rio de Janeiro Tim Ashley guardian.co.uk Reviews Fri 20 Aug 2010 14:50 BST Greyfriars Kirk, Edinburgh Had anyone told me that a festival high point would have been a reconstruction of a 1718 fiesta in honour…
END_OF_DOCUMENT_TOKEN_TO_BE_REPLACED

Apologies, but no results were found. Perhaps searching will help find a related post.